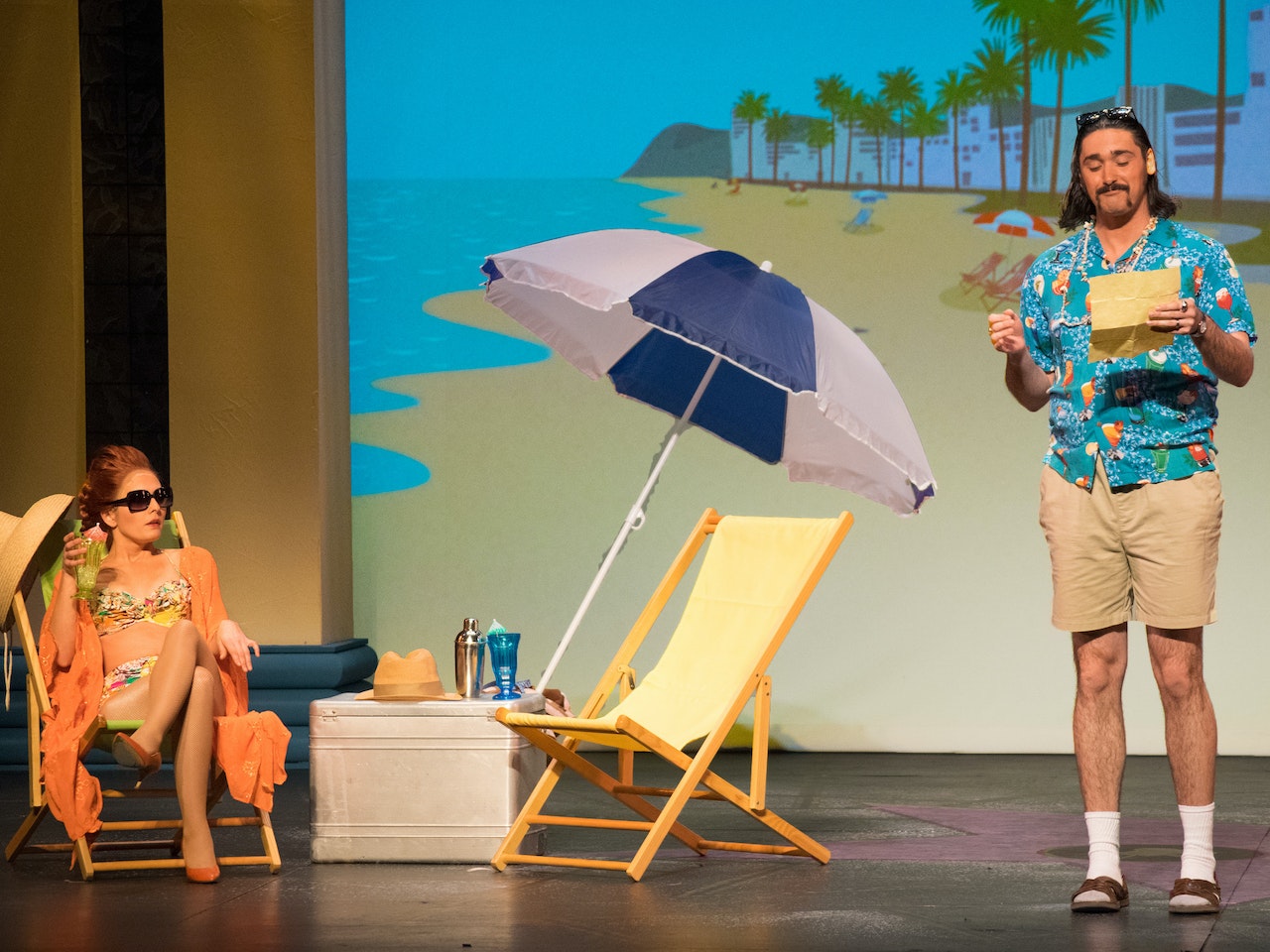 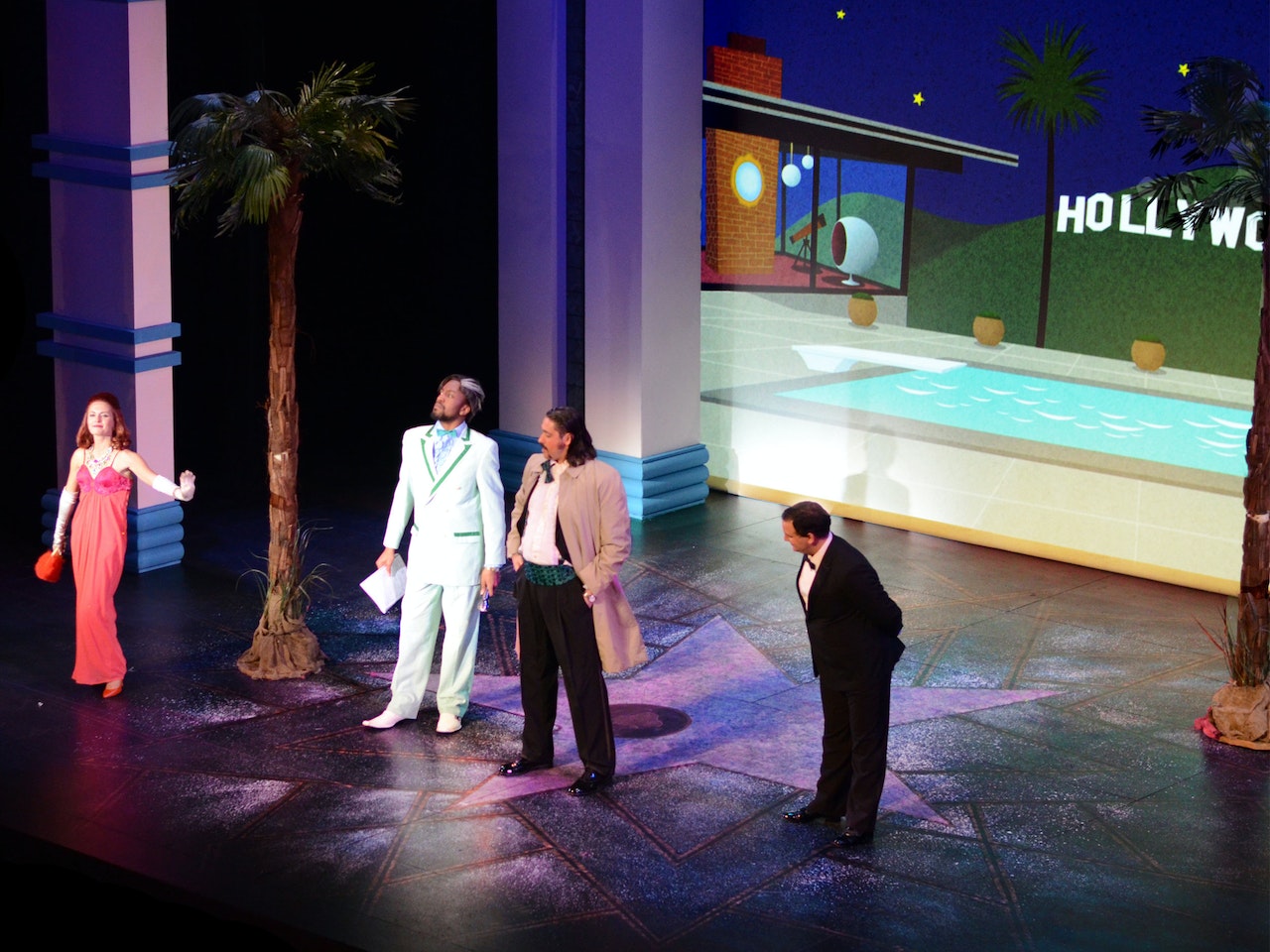 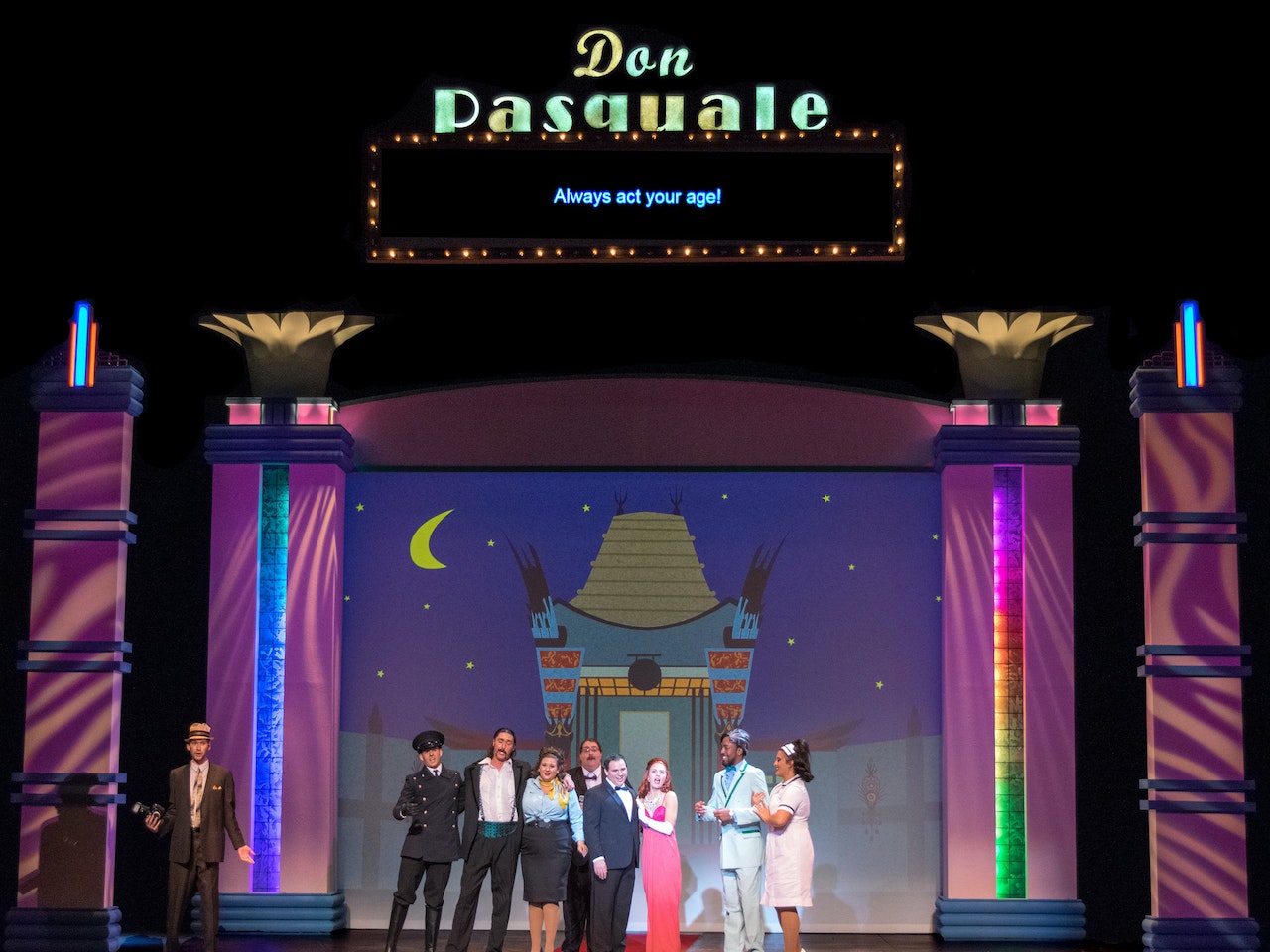 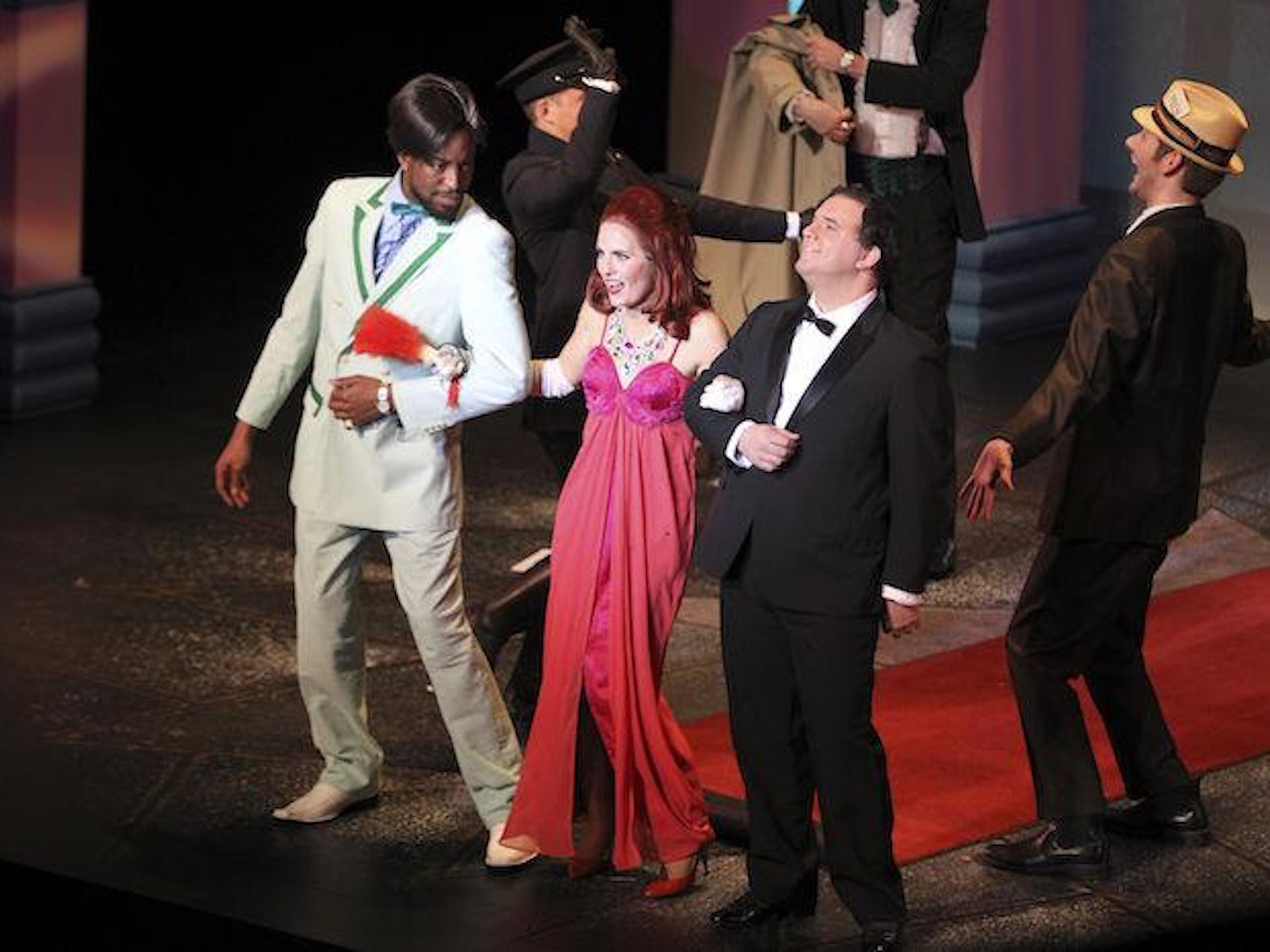 This production of Don Pasquale in Hollywood was produced by the University of Oklahoma School of Music in 2017 based off of a concept created by director Chuck Hudson in 2014 and remounted several times throughout the country.

You can see my dramaturgy packet for this production here.

Don Pasquale is considered the last great Italian opera buffa. The opera buffa style emerged from the comic intermezzi of the 1730s – short works that were performed between the acts of longer, serious operas. Starting out as a less-serious form, opera buffa gradually gained widespread support and recognition. Where opera seria centered around mythological or historical ideas, virtuoso-voiced castrati, and formal balanced structure in a reflection of court etiquette on stage, opera buffa was unpretentious, more life-size and human in scale, and really focused mostly on making an audience laugh. Because of the shifted focus away from a heroic plot and toward comedy, opera buffa developed ensembles and finales – elements perhaps more useful in comedy than drama – earlier than opera seria did.

Sidestepping any danger of simply being a slow-moving concert in ornate costumes, opera buffa embraced rapid, dense plot and was much more musically venturesome. By 1800, opera buffa had definitively overtaken opera seria in Italy, and would maintain its position for more than two decades. Operas seria were still being written, of course, but in the period of crisis and change in Italy, they were usually unable to relate to audiences who now thought of opera houses as social areas rather than places for deep concentration.

Opera buffa’s heyday was set squarely in the Napoleonic period – volatile, topsy- turvy times when thrones were being vacated as hastily as they were filled. The status quo, which tended to be reinforced by opera seria, made less sense to this audience when many of the old dynasties had just been overturned. Comedy’s emphasis on improvisation, disguise, impersonation, and its willingness to embrace chaos perfectly reflected the temper of the times. Donizetti, born in 1797, grew up in this new period. His first musical impressions were primarily that of opera buffa, and his first teacher (Mayr) actively studied and wrote comedies as well as serious works. Mayr’s music school staged a comic pastiche at the end of every term, and Donizetti performed in several, as well as contributing music to them. Over his 27-odd year career, Donizetti completed 65 operas, roughly a third of which were comedies.

The sudden emergence of the Romantic melodrama overshadowed the great vogue of opera buffa around 1830 and would continue to dominate the Italian opera scene until almost the end of the 19th century. Donizetti showed great prowess in regards to Romantic melodrama, and his works Lucrezia Borgia and Lucia di Lammermoor did much to establish the genre’s enduring popularity. While he didn’t desert opera buffa completely, he turned to it less frequently during the second half of his career.

When writing Don Pasquale, Donizetti chose to rework the scenario of Pavesi’s Ser Marcantonio of 1810, a now forgotten comedy from the golden age of opera buffa that coincided with his youth. Donizetti updated the old plot and turned it into a contemporary comedy of manners. As well as composing, Donizetti had worked many long years in the theatre; this experience served him well as he composed Don Pasquale. The work’s surety of effect and solidity of content, with all its old fashioned charm and tenderness and breathtaking moments of pathos, combine to make Don Pasquale Donizetti’s funniest and warmest comedy.

The underlying dramatic and musical motif in this comedy is the eons-old contrast and wrestling match between the old-fashioned and the modern. The contrast between arranged marriage and marriage for love – an old tradition versus a modern idea – drives the plot. Comedies almost unanimously end in reconciliation, acceptance, and tolerance. Donizetti heightens the point by dovetailing the two contrasting tendencies at the end of Don Pasquale.

In the traditional opera buffa finale, one or more characters state the moral of the story; Donizetti has Norina do so here, setting her words to a bubbly, joyful dance tune. Don Pasquale’s moral is: Age is foolish when it goes looking for young love it cannot truly have. Perhaps subconsciously, Don Pasquale is somewhat autobiographical. At the time he wrote it, Donizetti was a widower in his late 40s. With the different connotation of age and shorter life expectancy of the time, Donizetti was feeling somewhat old by this point. Because of his widespread acclaim in the public eye, he was continually dodging efforts to marry him off. The irony of Don Pasquale, then, is that it is Donizetti’s own last laugh.

Don Pasquale was originally performed in Italy in 1843 and has traditionally been performed in the same setting. So why restage it in 1960s Hollywood?

The themes of Don Pasquale fit into this new, glamorous setting like a hand in a well-tailored glove. The shifting of generations and the clash of traditional and modern ideals – these are timeless, ever-present parts of life. Throughout the years, though, certain periods arise where this conflict is stronger than most. Both 1960s Hollywood and 1843 Italy were distinct periods of transitioning values. People of both times had just undergone eras of deep conflict (World War II and the unstable Napoleonic period of ever-changing authority). However, both led into periods of carefree prosperity where the clash of generational expectations was deeply present. In either setting, the flashy, free spirit of youth and the more seasoned spirit of age circle each other in a dance ripe for conflict and hilarity.

This production of Don Pasquale has attempted to displace the stock commedia dell’arte characters of the original opera and set them down in an era where sitcoms like The Doris Day Show, That Girl (Marlo Thomas), and I Love Lucy (Lucille Ball) elevated those character tropes to modern acclaim. The clever wife, the foolish husband, and the larger-than-life comedy of their incongruity resonates in clear harmony with 1960s entertainment. We hope you enjoy the traditional story, classic restaging, and glamorous design of University Theatre’s production of Don Pasquale (In Hollywood)!